In 2017, we wrote an article titled “Platinum – the Investment of a Generation”. At the time, the Impala Platinum share price was R35. Now it’s R240. What can we learn from this massive gain and what is the outlook for the industry now?

Investment opportunities of this magnitude manifest when there appears to be significant uncertainty, which leads to asset mispricing. This was the case with platinum shares four years ago. Amazingly, the platinum industry has not changed materially since then in terms of supply and demand for the metal, which is the fundamental driver of metal prices and the associated share prices.

What has changed is the metal basket price (PGM – Platinum Group Metals – Platinum, Palladium and Rhodium) has tripled as supply constraints for Palladium and Rhodium have materialised. Although these supply constraints were forecast four years ago, the view was that through substitution between the metals, prices would remain more balanced. However, this substitution is yet to take place resulting in sky-rocketing palladium and rhodium prices, with the PGM basket price soaring from R15000/oz to R45000/oz.

What is the future for Platinum shares?

The key determinant is what will PGM prices be in three to five years’ time? Currently, based on Platinum share prices, the market is implying that PGM prices will decline significantly (30% to 50%) in the next few years. Impala Platinum (R240/share) is currently trading on a forward P/E of around 5x earnings. If the market believed that PGM prices would not decline significantly, the share would be at least 50% higher.

So, what do the experts say?

We draw on a recent report from Ninety One, that says “we maintain a bullish (i.e. positive) outlook for PGM prices over the near term”. The key is predicting future PGM supply and demand.

Supply is expected to remain constrained as 55% of PGM global supply is mined in South Africa, where over the last decade there has been limited investment in mining and production profiles are declining.

Demand forecasts are more uncertain, most notably predicting the growth in electric vehicles (EV) and the demise of the internal combustion engine (ICE), in petrol and diesel cars. Autocatalytic converters used in ICE account for around 60% of PGM demand. In a global push to reduce carbon emissions to net zero by 2050, some countries have very ambitious plans to reduce/ban ICE over the next 10 years. The UK plans to ban the sale of ICE by 2035. See global vehicle sales forecasts below: 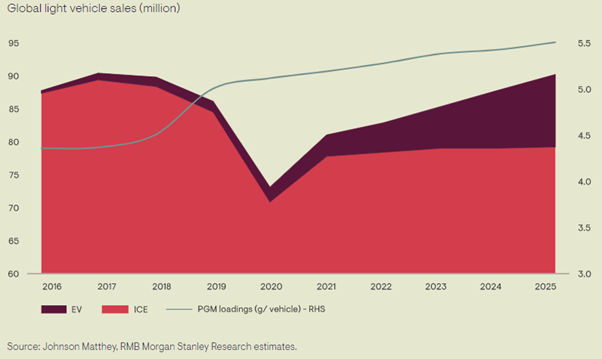 If ICE vehicle sales have peaked and the adoption of EVs is accelerating, then why do PGM prices remain at all-time highs?

If you believe PGM demand is sustainable over the next few years and that substitution within the basket does not materially disrupt prices, Platinum shares are cheap.

Platinum shares are now held broadly across most unit trusts, which was not the case in 2017.  Our portfolios maintain overweight positions in the sector.