The Rand is staying true to form – very volatile. However, the long-term outlook remains very negative. We provide an analysis on forecasting the Rand with some key decision points and how to incorporate an offshore strategy into your investment portfolio.

The Rand continues to be the most difficult asset class to forecast in the short term (1 to 3 years). And currently, it remains true to form, exceptionally volatile. We explain what mostly drives the Rand in the shorter term and investigate the best way to forecast the Rand for the long term.

Main short-term drivers of the Rand 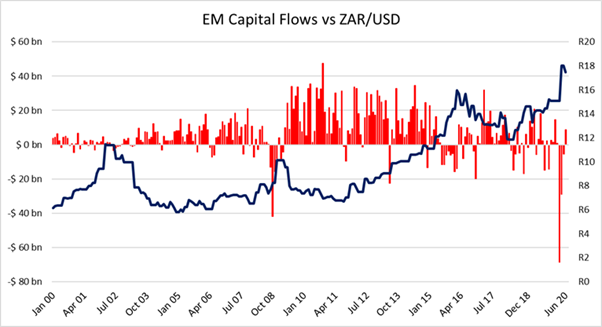 Global flows in and out of Emerging Markets (EM) are a major driver of the Rand. These flows are driven by global economic changes and geopolitical uncertainties.

Over the last three months, there has been a rotation of funds flow to EM from Developed Markets (DM), largely due to the announcement of  a successful vaccine being produced and a resurgence in COVID-19 in the USA and Europe.

Over the last four months, there has been a large trade surplus, which is a net inflow of money into the country, creating more demand for the Rand. The surplus is driven by a surge in commodity exports (platinum group metals being the largest contributor), and a decline in imports as local consumer demand has decreased with the economic slump.

Per the graph above, these trade flows swing significantly from surplus to deficit in a few months, which is likely to remove the current trade support for the Rand.

The trend is your friend

The graph below is the R/$ 200-day moving average, which clearly shows the Rand’s retreat after each spike. Now that the Rand has retreated, if it follows the trend, the retreat is close to being completed. This means that further major strengthening is unlikely.

Like any other asset class (equity, bonds, property, etc) the fundamental value will determine its price over the long term (+5 years). The Rand/Dollar purchasing power parity (PPP) driven by the inflation differential between SA and the USA is the most popular fundamental valuation method. The PPP is effectively the number of Rands that are needed to buy the equivalent of 1 US Dollar of goods. 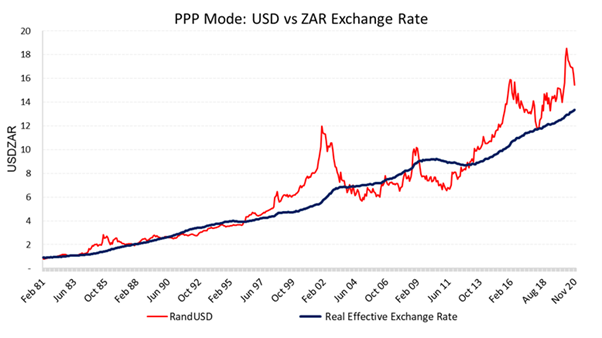 Per the graph above, the fundamental value of the Rand or PPP is 13.4, represented by the blue line. But this is where it gets complicated because the investment market prices in the risk of this theoretical fundamental value changing in the future. Thus, the actual R/$ is not tracking the real effective exchange rate (PPP).

The graph below is the difference between the actual R/$ price and the PPP value. This difference is commonly called the “sovereign risk premium”. It is the perceived economic stability of the country. Barring global shocks to the Rand, this risk premium has steadily increased over the last 8 years (averaging 20%) as the country’s economy has deteriorated and the political landscape has weakened. 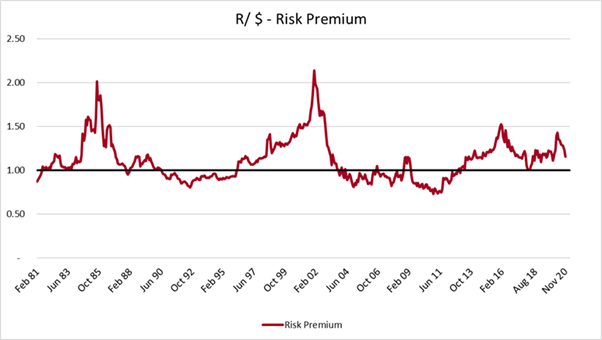 Given South Africa’s fragile financial position with government debt shooting-up to 82% of GDP and a projected weak economic recovery of 3.5% and 2.4% in 2021 and 2022 respectively, after this year’s -8% decline, the risk premium should continue to increase to + 25% as government debt spirals out of control. This values the Rand/Dollar at 17.80. 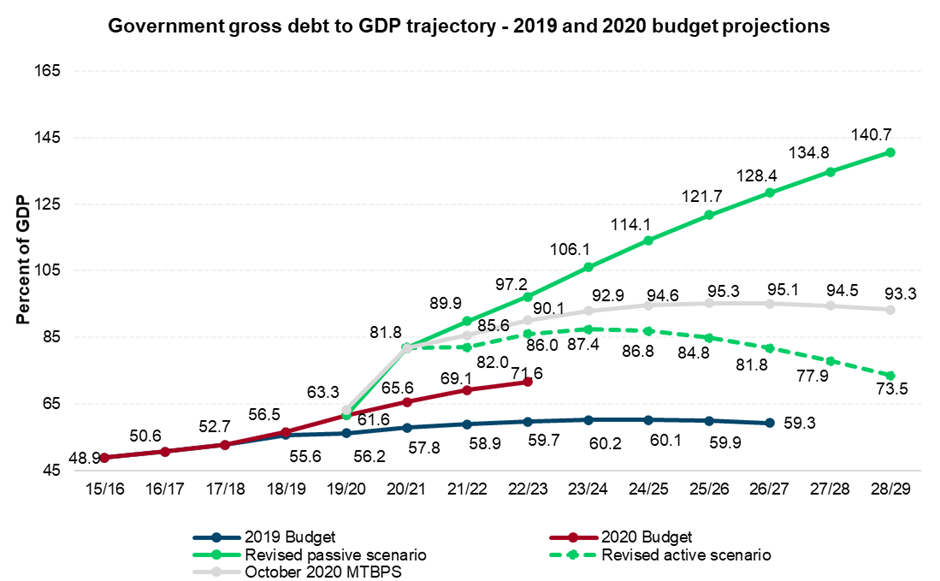 In October, the Government revised its debt to GDP outlook, which is the grey line. We believe this is not achievable without meaningful economic policy changes, which are not taking place. The risk is that the green line materialises, which is far more likely as explained below:

To reduce debt, revenue needs to exceed expenditure. Per the graph below, the expenditure gap over revenue has widened over the last 8 years and ballooned this year as the economy has collapsed with the lockdown. 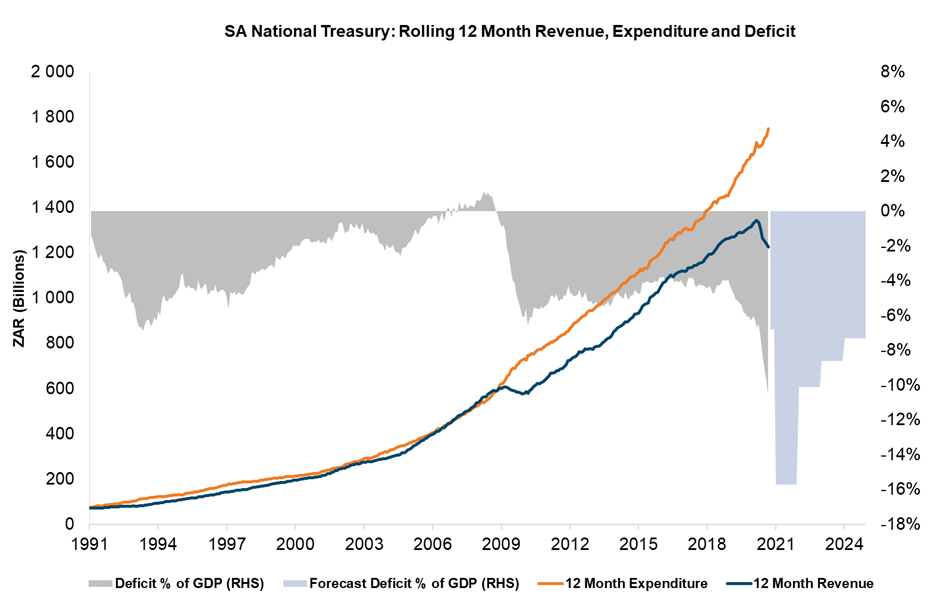 Government’s strategy to eliminate the deficit, is to cut government expenditure and grow the economy.

Cutting government spending (if it materialises) is a short-term measure, but ultimately, we need growth to increase revenue. However, this requires more debt to be invested into income-producing assets, such as infrastructure. But, with our high debt, junk status and government’s poor delivery track record, funding is expensive and private investment is difficult to attract.

However, the biggest constraint to growth, is government’s lack of skills to execute investments productively. We believe this will not be rectified under the current government.

Therefore, without this execution capability, debt to GDP will exceed 100% by 2024, which will likely require funding from foreign sources (such as the IMF). This will put significant strain on government finances and ultimately lead to a further weakening of the Rand.

Other funding is in the form of a prescribed asset policy, which we believe is unlikely. But government may resort to using government pensions to fund “expenditure”.

How much should I invest offshore?

There will also be times in the short term where the Rand may be under- or over-valued against the US Dollar, which provides short-term opportunities.

A general industry guideline of the percentage of your money that should be exposed to foreign currency is:

The reason that these percentages differ based on risk profiles, is that foreign currency is a volatile asset class and is therefore not suitable for all types of investors.

Please click here to set up an appointment to talk to one of our Portfolio Managers.

Investonline launched in 2009 to provide independent investment advice in a digital age that is forever evolving. By utilising technology and the latest financial planning models, financial planning can now be done from the comfort of your own home or office while still preserving the personal relationship that is at the heart of financial advice.

Each client is serviced by their own personal Client Portfolio Manager, with a support team, to ensure effortless portfolio management and financial planning.

Lifestyle financial planning tailor-made for you

Planning for your legacy and loved ones

Speak to a Client Portfolio Manager

Digital Financial Planning With Us

Once we have implemented your financial plan and structured your investment portfolio, we will regularly review both to ensure that you stay on track to achieve your financial goals. This includes making adjustments, when necessary, to either the investment strategy or your personalised plan.

Meet with our team using Zoom, MS Teams or in person.

Experience our Value-Add over the long term

Investing with Investonline is much more than a once-off experience. Our service offering has been constructed to add value to our investors through every step of their financial and retirement journey.

What are my retirement needs? What our clients say

View all reviews on

The Best Investment Decision I ever Made

From the time I first connected with Investonline many years ago, the feel-good element was present. Professional, friendly, and proactive advice and suggestions, have always been provided in the best interests of the client. I continue to be very happy with all interactions with Investonline, from my designated Financial Planner, to whoever else might be on the end of a telephone call or e-mail.

Great to deal with a company who went out of their way to understand my specific needs and to explain their reasons for suggesting alternative investments to what I initially was considering. Admin and contact with Investonline has been excellent so far.

As a complete stranger to investing large sums of money, the team at Ivestonline where unbelievably professional and my portfolio was created without a glitch. I am super confident of a long and prosperous relationship.

Thank you once again for your excellent service

Thank you once again for your excellent service Stuart. You are always there for us when necessary and we really appreciate your friendly and honest approach and very professional assistance. We look forward to a long and mutual relationship with you and Investonline.

Tips when doing your taxes

It’s tax season again, and we’ve set out some simple guidelines to ... 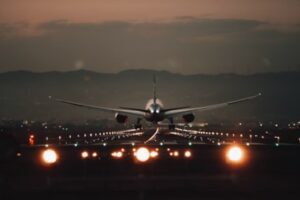 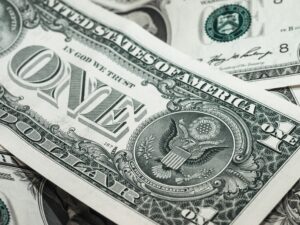 An update on offshore investing in a volatile world

Offshore investments should form a critical part of your investment po ... 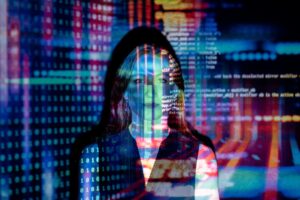 Rising interest rates and inflation have been huge drivers of the sect ...

Integrity, a strong sense of responsibility, an emphasis on quality, discipline and teamwork inform Investonline’s ethos. It is only with these beliefs that we can offer a truly professional service that encompasses independent advice, denotes transparency and translates into fair fees.

In our business, we place the highest value on Trust, Respect, Passion, Dedication, Performance, Research and Learning.

We work towards Investonline being a happy and productive workplace that benefits our clients. We encourage independence and accountability, best practice, reward achievement and work tirelessly to deliver client service that makes us proud.

We’d like to hear from you.
Send an email, give us a call / video call or come see us in person.