Forecasting the Rand exchange rate is the one area that most investors have got wrong in the short to medium term (1 to 5 years). So much so, that most investment fund managers don’t forecast the Rand. The main reason why it’s so difficult to forecast, is that there are so many external (global) factors driving the currency:

As investors, we have very little sight of these factors or changes as the Rand is being measured relative to many other global currencies. 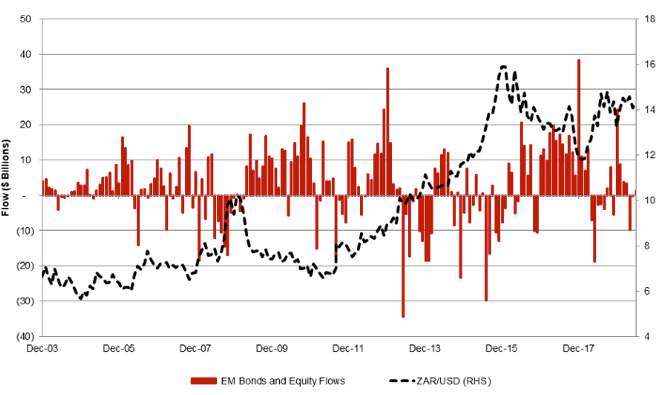 The chart above shows that often, negative flows (money moving out of Emerging Markets) weakens the Rand and vice versa.

Fundamental Value of the Rand

This is measured in many ways. Economically, the Rand should weaken at the inflation rate differential between different countries. For the USA and SA – over the last 30 years – this is an average 4.6%, which is less than the 5.7% per annum Rand depreciation over this period, as per the graph below.

Rand/Dollar exchange rate based to 100 from September 1989

If the Rand had depreciated at the average inflation differential of 4.6% over the last 30 years, the Rand would be 10.80 to the US Dollar today. The difference is due the deterioration of SA’s infrastructure, an increase in Debt to GDP from 30% to +60% and negative political sentiment.

This measure of the Rand is based on how many Rands are needed to buy the equivalent of 1 US Dollar of goods. Per our graph below, the fair value of the Rand based on PPP, is 12.50 to the US Dollar. 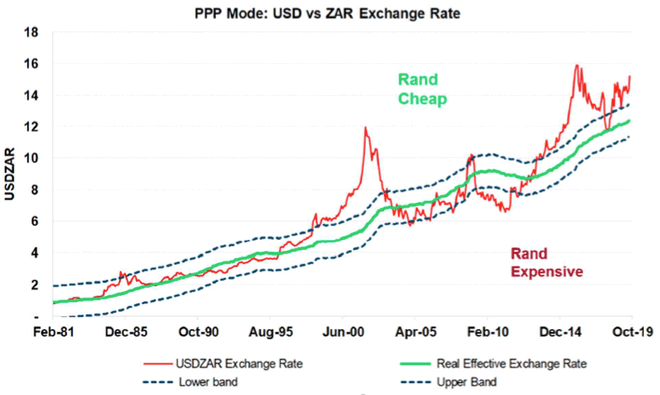 The green line represents PPP of the Rand, suggesting that the Rand is fundamentally undervalued on this basis.

Looking at the Rand/Dollar over the past 5 years, the sentiment in the media has been that the currency has been on a constant decline, which is not true. The Rand has been bouncing around in a wide range and the swings have been largely influenced by emerging market flows and sentiment, not purely driven by our local economic woes. Periods where the Rand has weakened to irrational levels above R15/$ have been followed by periods of currency strength.

Over the long term (5 year +) the Rand is likely to continue weakening at an average 5% per annum. The 5% could go higher if SA inflation soars and the government can’t get its debt under control and stimulate higher economic growth.

In the short to medium term (1 to 5 years) the Rand will continue to be volatile as local emotional and external global forces move the currency up and down. Our short-term forecast for 2019 has been that the Rand /Dollar will be range bound between 13.5 and 14.5. We still expect the Rand to end the year within this range.

The two key issues locally that will drive Rand sentiment in the short-term is government’s plan to rehabilitate Eskom and whether President Ramaphosa will take a firmer stance against the labour unions. Over the next few months, we should have a better idea of these outcomes.

How does the volatile Rand affect an offshore investment?

Assuming we compared a USD Income Fund achieving 2.25% p.a. (in USD), with a local ZAR Income fund achieving 8.50% p.a. (in Rand), the Rand would need to weaken to the following levels to achieve the same annual return:

In the event of the Rand weakening to these levels, this offshore investment will achieve a Rand performance of 8.50%.

However, in the event of the Rand strengthening instead, the USD Income fund investment will experience the following (Rand) losses:

How much should I invest offshore?

There will also be times in the short term where the Rand may be under- or over-valued against the US Dollar, which provides short-term opportunities.

A general industry guideline of the percentage of your money that should be exposed to foreign currency is:

The reason that these percentages differ based on risk profile, is that foreign currency is a volatile asset class and is therefore not suitable for all types of investors

Welcome to the digital age of financial planning.

Let us guide your journey through expert analysis and experience.

Discover your investment needs with our calculators