Recent regulatory changes in China have once again rattled the Chinese stock market and highlighted the continued risk for investors holding Chinese shares. This does not mean that investing in China is a bad idea, rather, it emphasises that an in-depth understanding of the environment is critical to extract the best risk-adjusted returns.

From November last year, Chinese regulatory changes re-emerged with the cancellation of the Ant Financial (an affiliate of Alibaba) listing, as it appeared the “bank” was becoming too powerful relative to other state-owned banks. Subsequently, many other changes have also occurred: tighter oversight of internet platforms, dissolving exclusive licencing, delivery services told to boost driver pay, Alibaba and Tencent were forced to open ecosystems to each other, and many companies were fined for anticompetitive acquisitions. This has rocked the Chinese stock markets with the Hong Kong market declining 18% the past 6 months. 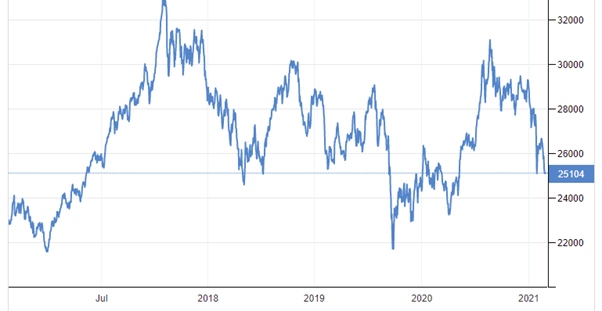 Since November 2020, the rapid pace of new regulations is unusual, but the broader regulatory push is not new. By and large, a more competitive and responsible corporate landscape is being developed. i.e., don’t be anti-competitive with a monopolistic position, treat personal data with care, etc.

Many of these rules are in place in western countries, but China has been less transparent and unpredictable with changes. So, what will be targeted next? And are these regulations a broader clampdown on capital markets and foreign ownership?

Currently, the closing of the wealth gap and lowering the cost of raising a family to promote “common prosperity”, appears most pressing, witnessed by interventions in the property and healthcare industries.

What are the implications for Naspers?

Naspers’ valuation mainly comprises its 28% investment in Tencent (listed on the Hong Kong Stock exchange). Although Naspers trades at a massive 40% discount to Tencent’s valuation, the Naspers share price has declined 40% since these new regulations emerged. For many fund managers holding Naspers, its massive 40% discount to its 28% investment in Tencent, is seen as a “moat” or an “extra cushion of safety” relative to an already “attractive” Tencent investment.

However, this big “Tencent discount” has not softened Naspers 40% decline (much in line with Tencent) the last six months. In addition, Naspers in aggregate (with Prosus) comprises 15% of the JSE All Share Index (ALSI), which has been a big contributor to the ALSI’s flat performance over the past 6 months.

Have an expert manage your China investments

There have always been concerns over China’s regularity environment, which can be difficult to understand. Further changes will continue as global economies and capital markets evolve, which will bring opportunities and risks, and will require ongoing expert research into these complex markets. Having an experienced investment manager is critical when allocating an investment into markets of this nature.