There is light at the end of the tunnel as SA rolls out the vaccinations and most of the world starts to open at different paces.  Consequently, the outlook for investments is looking more promising. However, markets are never smooth sailing, and we need to be aware of some of the potential bumps ahead.

Investment markets remained fearful in the 3rd quarter and continued to track sideways in a band of 5% up and down over the last six months. Sector returns have swung with local (SA Inc.) sectors up 15% and internationals, such as Resources down -7% and Naspers down -30%. Foreigners have continued to be net sellers of equities and bonds for the last 4 months. Despite this, the Rand/Dollar has remained flat, supported by a continued abnormally strong trade surplus.

However, the reality is that a myriad of economic uncertainties remain despite there being light at the end of the tunnel in dealing with Covid. The economic after-effects are proving way more of a problem than ever expected and there are still many more bumps ahead until a “back to normal” is realised.

How long do we need to remain patient before “normality” returns?

Questions remain over what the new normal will be. Day-to-day living can only become more efficient with a more accepted online world, but the economic landscape is proving to be far more varied.

In our view, there are several, critical issues facing global and local investment markets:

New Chinese legislation and an economic slowdown – Has this changed the investment case for China? The concern is that the “internet /social” restrictions are pointing to more inward focus and ignoring external investors. Although the economic growth slowdown to below 6% p.a. was inevitable, does it signal the start of a collapse? We believe not, as the government has many levers to drive and support the economy. But overall, we believe China now requires a far sharper investment focus in mitigating risks.

Delta variant spread – This has largely curtailed the opening rate of many Eastern economies and added to a slower global recovery. Further Covid variants are likely as the virus mutates, which could present more recovery obstacles into the future.

Supply chain disruption – General global demand and supply is out of balance as spending trends changed through Covid lockdowns. Shortages in many industries, such as computer chips, oil and gas, are being very disruptive. This has added to massive forecast uncertainties as markets grapple with the “new normal”.

Inflation fears continue – Some major prices have soared from pre Covid: Shipping +400%, Metals & Minerals +60%, Food +40%, Oil +30%. Global inflation has spiked, but is this just temporary or a longer-term threat? This is still a major debate, although markets still believe higher inflation is transitory.

Rising interest rates – Interest rates are rock bottom and can only go up, however, the magnitude and speed of increase is a major concern, given the abnormal amount of global debt of $281T. Global Central Banks are very aware of these risks and are managing the sensitive situation well.

The Covid 3rd wave is nearly over – With the country moved to level 1 lockdown, the economic outlook is looking more promising. But there should be a 4th wave, however, experts are uncertain when it could occur, and they are hopeful that the size will be far smaller than the previous three waves.

It’s become generally accepted that Covid is here to stay and that we need to learn to live with it, meaning that we must build an immunity through periodic vaccinations. i.e., building up a resistance similar to flu.

Vaccinations rates are still low – Only 16% of SA is fully vaccinated versus the global average of 35% and US and Europe around 55%. This low vaccination rate could be a stumbling block to a sustained economic recovery.

Municipal elections concerns – A lower voter turnout is predicted with an added risk of a shortage of ballot papers, due to the short preparation time.  A recent Ipsos (multinational research consultants) survey shows: ANC 49%, DA 18% and EFF 14%. A strengthening EFF is a concern, but a weak opposition is even more of a problem, as the ANC needs to be kept in check.

The Rand weakens as commodity prices decline – We believe the Rand’s fundamental value is R17.60 to the US Dollar, derived from a purchasing power parity (PPP) of 14.1 plus a 25% risk premium, which is representative of SA’s weak economic (a 3-year forecast debt/GDP of 90% +) and lack of growth implementation skills. 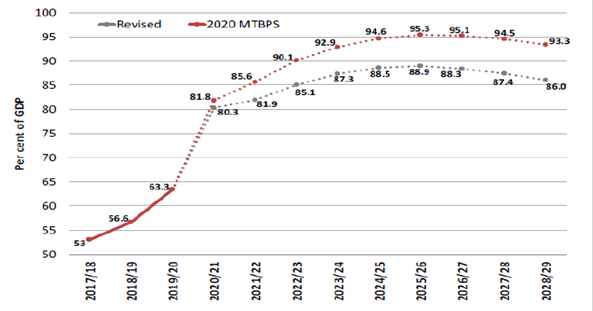 Positive mid-term budget – GDP growth is expected to be higher at +5% driven by abnormally high commodity revenues. This should reduce debt to GDP to below 80%. Talk of creating a more business friendly environment will be encouraging. However, material policy changes to drive growth and curtail government expenditure are still imperative. Without change, the dreaded debt trap is still looming.

SA interest rates bottomed – Interest rates are likely to gradually start increasing by the end of the year but should not have a materially negative effect on the economy. Inflation is expected to remain relatively low over the next two years, barring a material weakening of the Rand.

Tourism opening – The UK and most of Europe opening is a major relief for the SA tourism industry as we enter our high season. We desperately need a bumper festive season.

Although there are many global headwinds in the shorter-term, more SA positive news should support attractive SA equity valuations. Global sector allocation remains imperative with a leaning towards value-based sectors and emerging markets.

The Rand remains vulnerable to lower commodity prices leading to an imminent shift to a trade deficit.

SA interest rates are expected to remain low for the next two years, which is positive for equities, but negative for interest earners. Including a measured portion of equity risk into your portfolio is essential to achieving after-tax returns above inflation.